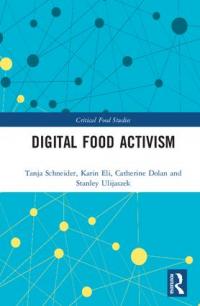 The chapters that comprise this volume call for careful consideration of the ways in which digital media and technologies offer new spatialities and materialities of political, economic, and social action concerning food. The experimental nature of some of the activist undertakings the chapters describe is underpinned by an ambition to challenge existing forms of food production, distribution and consumption. The chapters, we suggest, show how digital food activism develops, extends and re-imagines food activism, foregrounding ‘connective action’ rather than ‘collective action’ (Bennett & Segerberg, 2012). What digital food activism is, however, remains contested. This volume demonstrates that food, and the ways in which it is produced, distributed and consumed, becomes an issue in some places, for some individuals and for groups, but not in/for others. The ontological reality of food as political, then, is situated. Producers, consumers and the digital platforms and technologies they draw on enact different food futures, including divergent ‘ideal’ behaviours and rules to live by, and implicating a diverse ‘ontological politics’ (Mol, 1999; see also, Mol, 2013) of food and the digital.

See other recent publications from Anthropology

See other recent publications from Anthropology