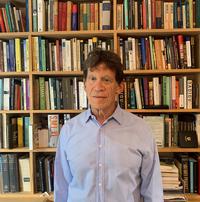 Scott Lash is a sociologist. PhD from London School of Economics; then from Lecturer to Professor at Lancaster University Sociology.  He was founder-director of the Centre for Cultural Studies at Goldsmiths, University of London. He teaches also at the Central Academy of Fine Art, Beijing and Klagenfurt University in Austria.  He is author/co-author of some 12 books (translated into 8 languages), including recently with Michael Keith and others, China Constructing Capitalism and Experience: New Foundations for the Human Sciences.  He addresses issues with a bearing on anthropology and migration studies in his present book he is writing, Infrastructure Power: Culture and Logistics in China.  Lash sort of ‘emerged’ with two books on the future of international capitalism co-authored with John Urry, The End of Organized Capitalism and Economies of Signs and Space. At about that point in time he co-authored Reflexive Modernization with Ulrich Beck and Anthony Giddens.

In 2002 he twigged that the future of global capitalism was somehow China. This coincided with an invitation from architect Rem Koolhaas to work on a bid for conceptual master plan for Shanghai Expo 2010 and later for Hong Kong’s West Kowloon Culture District.  He has done China work ever since.  Lash has been Principal Investigator on four reasonable-sized ESRC and one Leverhulme Foundation grants, four in the area of digital media and culture industry. He is on as central panel for European Research Council Synergy grants.  He was half time professor at Chinese University and the City University of Hong Kong from 2015-2019. He has been guest professor at Nanjing University 2011-12 and Shanghai University 2013.  He has been invited again as guest profit Nanjing University and Beijing Normal University for the forthcoming year.

Scott has been a mainstay on the editorial board of Theory Culture & Society since 1992, alongside Mike Featherstone the only one really to span most all the history of TCS.  At the moment, apart from writing the book above and TCS editorial responsibilities, He is co-editing a TCS special issue Against Ontology: François Jullien and Chinese Thought and (with Sophie Haines) Logistification: War, Capital, Ecology with contributors ranging from Jullien to Wang Mingming, Stephan Feuchtwang, Laura Bear and Biao Xiang.  He is putting together an art/research programme with French artist Morgane Tschiember on ‘The Imagination of the Wild’ in conjunction with galleries in Hong Kong and Shanghai and possibly the Central Academy Fine Art, Beijing. He has been thinking (pre COVID-19) of helping initiate a research project on river system: Port of Wuhan, which would look at the Port and greater Wuhan as a conjunction of ecological, migration, epidemiological, geological and atmospheric systems.