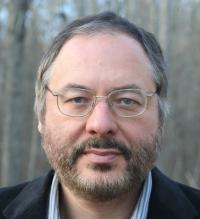 Peter Turchin was trained as a theoretical biologist, but now he works in the field of historical social science that he and his colleagues call Cliodynamics. His research interests lie at the intersection of social and cultural evolution,  historical macrosociology, economic history and cliometrics, mathematical modeling of long-term social processes, and the construction and analysis of historical databases. Currently he investigates a set of broad and interrelated questions. How do human societies evolve? In particular, what processes expalin the evolution of ultrasociality—our capacity to cooperate in huge anonymous socieites of millions? Why do we see such a staggering degree of inequality in economic performance and effectiveness of governance among nations? Turchin uses the theoretical framework of cultural multilevel selection to address these questions. Currently his main research effort is directed at coordinating the Seshat Databank project, which builds a massive historical database of cultural evolution that will enable us to empirically test theoretical predictions coming from various social evolution theories.

In 2010, together with David Sloan Wilson and Jerry Lieberman, Turchin founded the Evolution Institute, which connects the world of evolutionary science to the world of public policy formulation.

Turchin has published c.200 articles in peer-reviewed journals, including a dozen in Nature, Science, and PNAS. His publications are frequently cited and in 2004 he was desginated as “Highly cited researcher” by ISIHighlyCited.com. Turchin has authored six books. His last book is Ultrasociety: How 10,000 Years of War Made Humans the Greatest Cooperators on Earth (Beresta Books, 2016).

Turchin is Editor-in-Chief of  Cliodynamics: The Journal of Theoretical and Mathematical History.

For more information, see Peter Turchin's webpage and take a look at his blog.