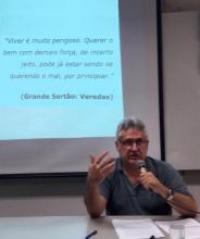 He is the author of several books and articles, including Como Funciona a Democracia: Uma Teoria Etnográfica da Política, which was published in Brazil in 2006, and has been translated into English as How Democracy Works: An Ethnographic Theory of Politics (Sean Kingston, 2013).

Most recently, he has been in the field studying the cosmopolitics of Afro-Brazilian religions in candomblé terreiro in the city of Ilhéus, in the south of Bahia. A book on this subject is in preparation.