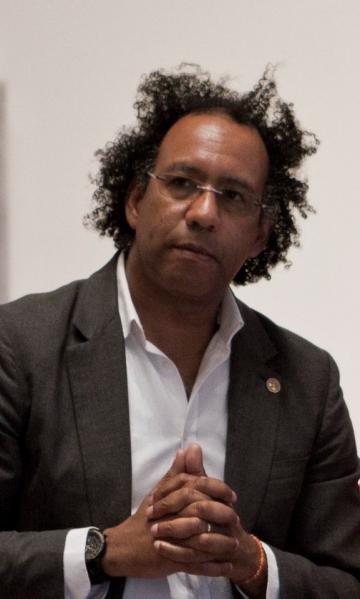 Martinez-Ruiz earned his B.A from the University of Havana in 1994 and his Ph.D. from Yale University in 2004. He is an Art Historian with expertise in African and Caribbean artistic, visual and religious practices, whose work challenges traditional disciplinary boundaries and examines the varied understandings of – and engagement with – ‘art’ and ‘visual culture’.

Following professorships at Havana’s High Institute of Art from 1993-1997, the Rhode Island School of Design from 2002-2004 and Stanford University from 2004-2013, Martinez-Ruiz joined the University of Cape Town, where he has served as the head of the Art History and Discourse of Art Department since 2013. He was the 2017-2018 recipient of the Leverhulme Visiting Professorship, hosted by Oxford’s School of Interdisciplinary Area Studies, and a Senior Fellow at St Anthony’s College and Trinity College.

He is currently working on Unwrapping the Universe: Art and Cosmology Among the Bakongo, a project that takes the Kongo concept of the universe as a packet or bundle and aims to “unwrap” the conceptual layers of specific works of art to gain a better understanding of their cosmological complexities and interrelated meanings and to describe the conceptual and functional associations of these objects within their cultural context.  Art forms explored include figurative sculpture, masks, divination implements, basketry, textiles, and ceramics and the book will disentangle the cross-cultural relationships these pieces both express and create while also tracing their historical evolution and present-day usage.

In addition to his research and teaching, Martinez-Ruiz is an active curator, whose shows have explored issues of visual communication, dislocation and hybridity in the work of contemporary artists across the African diaspora. He also serves as an editor for the Cuban Studies Magazine and Harvard's Transition Magazine and was a researcher for Pacific Standard Time AL at the Getty Foundation and the Museum of Latin American Art, Los Angeles California from 2014-16.

A. Collaboration with William Beinart on rarely utilized visual and written material from the Bodleian’s collection on cartographer, explorer, naturalist and polymath William John Burchell and the images documented during Burchell’s early XIX century research expeditions in the African Atlantic world, which provide both a unique historical perspective and impart lessons relevant to contemporary global issues such as the depiction of otherness, ethnography and ecology;

B.   Collaboration with senior researcher Wolde Tadesse of Oxford’s Institute of Social and Cultural Anthropology, towards the creation of an Oxford African and Afro-Latin American Visual Metadata Database that endeavours to compile all visual representations of Africa and its Diaspora produced between XV to early XX centuries and now held in the vast collections of the Oxford Bodleian library system and Oxford college libraries, including maps, travel narratives, scientific expedition records, letters and other correspondence, watercolours and painting, drawing, prints, and photographs. In collecting the data, the essential criterion is "What does the visual material evidence tell us about African culture, history, and legacy? rather than ‘encyclopaedic’ compilations limited by exclusive focus on representations of Africans in Western imagery.

C.   Continued membership in the Oxford Research Centre in the Humanities group on heritage, empire, and the display of 'otherness' and race in museum spaces for the 'Race and Resistance programme, including an exploration the linkage of museum display questions with issues specific to contemporary Oxford, such as Rhodes and imperial heritage in public space, the 'Ethics and Empire' debate.

D.   Collaboration with Ramon Sarro (Institute of Social and Cultural Anthropology), Marie Yvonne Curtis (Independent Researcher, Guinea) and Ana Temudo (Independent Curator, Portugal) on "Blow-up in Bissau: Images and Post-war Reconstruction of a West Africa Museum", an effort to reconstruct an ethnographic photographic archive of the National Museum of Guinea Bissau and combine it with a collection of over 2000 field photographs of Baga people donated to the Pitt River Museum by Malcolm McLeod, former keeper of the British Museum.