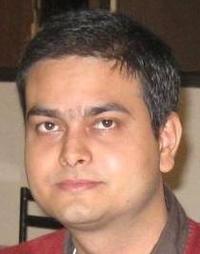 Shashank Chaturvedi is a political anthropologist working in the area of religion and politics. His work addresses the interplay of religion, culture and power in Contemporary North India with a special focus on Eastern Uttar Pradesh.

He did his PhD at the Centre for Political Studies, Jawaharlal Nehru University, New Delhi (India) and is currently teaching at the Centre for Development Practice and Research, Tata Institute of Social Sciences. Before joining TISS, Shashank taught at Indraprastha College for Women (University of Delhi) for three years.

His PhD dissertation, titled Religion, Culture and Power: A Study of Everyday Politics in Gorakhpur examines micro (everyday) politics in Gorakhpur, Uttar Pradesh, as it interacts with the religious institution of the Gorakhnath Math and its Mahant (Chief priest). His research findings suggest that religion and politics combine in complex ways through the institution of Gorakhnath Mutt and create opportune moments for the Math to play an active role in the local politics. After his PhD, he was a co-researcher in a project, ‘Democratic Cultures in South Asia,’ funded by the European Research Council (ERC) and Economic and Social Research Council (ESRC) based at the University College London (UCL), UK. His contribution involved analysing the transformation of the Gorakhnath Math in Gorakhpur and the affiliated educational institutions into a hub of local and regional politics in eastern Uttar Pradesh. He also looked into the causes of the rise of a nexus between the mafia and politicians in the 1980s in this region and its eventual demise in the 1990s. In addition, the research also investigated the emerging politics of development in Gorakhpur. His publications have drawn on the doctoral and UCL research projects. Two of his key research articles are, one published in Society and Culture in South Asia, Sage 2017, and the other one is in Contemporary South Asia, Routledge 2019 (Co-authored with Prof. David Gellner, University of Oxford and Prof. Sanjay Pandey, JNU).

As a Research Affiliate, he will work on the Project “Understanding the 2022 state elections in eastern UP (Uttar Pradesh), India (SRG21\211342)” supported by the British Academy (BA/Leverhulme Small Research Grants SRG 2021). Along with Prof. David Gellner (University of Oxford) and Prof. Sanjay Pandey (JNU), Shashank aims to understand state level elections and political dynamics in the Poorvanchal (Eastern Uttar Pradesh). While working as a Research Affiliate, he will also submit a book manuscript titled Math, Mahant and Religious Identity: Ideas, symbols and political moblilisation (Routledge, 2023).