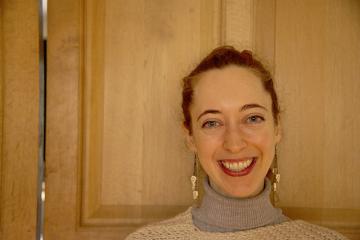 Bronwyn's research combines her passion for dance and music with her curiosity about human nature and evolution of social behaviours. She is interested in why humans have such a longstanding love-affair with music, and the nuts and bolts behind the social benefits of taking part in musical activities.

Bronwyn is originally from Namibia, and moved to the UK to read towards two degrees at the University of Oxford, funded by a Rhodes Scholarship. Her academic experience includes an BSc(hons) in evolutionary biology (University of Cape Town), an MSc in environmental sciences (Oxford), and a DPhil (Oxford) in social and evolutionary psychology—focussing on the evolution of dance. She is also trained in fine art, as well as classical ballet, contemporary and Latin dance. Based in Professor Robin Dunbar’s Social and Evolutionary Neuroscience Research Group, Bronwyn’s doctoral research centred on evolutionary theories of our species’ love-affair with music and dance. Working with people in Brazil, Oxford and Barcelona, she has researched how dancing in synchrony acts as a social glue, causing the release of endorphins and the experience of a collective ‘high’.

During her doctoral studies Bronwyn began collaborating with Dr. Emma Cohen at the Institute for Cognitive and Evolutionary Anthropology (ICEA). Their collaborative research was based at Dr. Cohen’s research site in Northern Brazil, and involved testing the social bonding and pain threshold effects of synchronous versus non-synchronous movements with a sample of Brazilian teenagers. After completing her doctorate, Bronwyn joined Dr. Cohen as a postdoctoral researcher in ICEA, during which they conducted a Virtual Reality study on synchrony and social closeness (based at Barcelona University, in collaboration with EventLab).

A believer in Open Science, Bronwyn has delivered a number of interactive public talks, Café Scientifique lectures, spoken on radio and podcasts and written popular science articles on her research. She has also written and developed a documentary series concept – ‘Musical Planet’ – which celebrates and explores humankind’s pervasive love-affair with music and dance, and which she hopes to partner with producers to bring to the screen.

A non-scientific discussion about her research: Oxford Research on 'How to live a happy life'

A popular science article written by Bronwyn about one of her research papers: 'The Conversation'