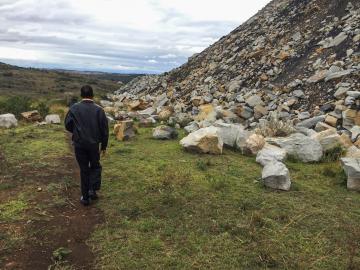 Homestead under mine waste, Somkhele 2017

(with support from the National Institute for Humanities and Social Science, South Africa)

Two ethnographic projects have been initiated during the first year of the project. The first, led by Thomas Cousins, focused on the uMfolozi River as a heuristic through which to follow histories of governance, political life, and environmental change. Student projects have so far included a study of an entrepreneurship training and an ethnography of the relocation of graves from the Tendele Mine area.

By taking the Mfolozi River as a central thread through which to examine social, political and economic concerns that are brought together by action on and adjacent to the river, we follow a socio-natural transect through a complex landscape that provides a lens through which to understand shifting ideas of nature and culture, social and economic processes, political authority, and environmental change. 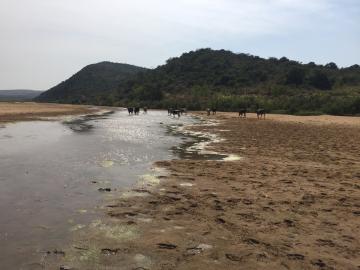 The region is often seen in populist accounts as a terrain of traditionality and rurality, and in post-Apartheid debates as a site of political contestation over land and environment, even while novel claims to customary political authority and revisionist retellings of the history of northern Zululand produce creative effects for territory and environment. The project takes the Mfolozi River as one way to scan a shifting and emerging set of publics and public concerns, and a means by which to examine several propositional hinges that bring together notions of social and collective life with reinvested assertions of customary (and patriarchal) authority. The effort is to collect life histories and narratives about the river and the various institutions, activities, and processes that shape human life along the river, as well as a range of other forms of life entangled with the river. By tracing the flows of concern through and around the river, it becomes possible to consider how mineral extraction, wetland restoration, sugar and timber plantation productivity, and populist assertions to land and peasant agriculture may come together less as expressions of rural peasant economies, and more as sites or  “patches” (Tsing 2015) in which fragmentary processes become surprisingly conjoined to produce what Anand calls “old-new articulations of banal infrastructures” (2017). How do new social forms emerge from this terrain of struggle? What new “nature-cultures” are articulated in debates over conservation, mineral extraction, population health surveillance, and state development and welfare programming?