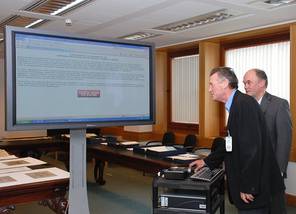 The long awaited online catalogue of the Hodgson Collection was launched by Michael Palin at a function hosted by Oliver Urquhart, the Head of African and Asian Studies, at the British Library on 25 July 2011.

Brian Houghton Hodgson lived in Kathmandu from 1820 to 1843 and in Darjeeling from 1845 to 1858. He was the British Resident in Nepal from 1833 to 1843. During his time in Nepal and India, he amassed a huge collection of documents on multifarious subjects in a wide variety of languages. 972 of these documents, comprising a total of some 15,300 folios plus scrolls, unnumbered notebooks and loose letters, were deposited at the India Office Library in London in 1864.

At the launch, David Gellner (Professor of Social Anthropology at Oxford) described his first attempts to use the Collection during his doctoral research in the 1980s.  He said he quickly realized that although various scholars had dipped into it in the past, the Collection had been seriously under-utilized because only twelve of its 104 volumes had ever been properly catalogued.  In 2000, he approached Michael Hutt  (Professor of Nepali and Himalayan Studies at SOAS) with the suggestion that they should jointly apply for funding to produce such a catalogue.  In 2001 they received a grant from the Leverhulme Trust which enabled them to employ Ramesh Dhungel, a leading Nepali historian, as a cataloguer-researcher for a period of three years.

Michael Hutt explained how the catalogue had been produced.  In addition to Dr Dhungel, the project had employed specialists (Sonam Rinchen Lepcha, Helen Plaisier, Bairagi Kainla, Shukra Sagar Shrestha, Chandra Prasad Tripathee and Firdous Ali) to read the many documents in the Collection that are written in Lepcha and Limbu (Tibeto-Burman languages of east Nepal also spoken in Darjeeling and Sikkim), Newari (the indigenous language of the Kathmandu valley), various languages of Nepal’s southern Tarai zone, including Maithili and Dehati, and Urdu and Persian. The work turned out to require more time than originally estimated and when the Leverhulme funding came to an end the Catalogue was not yet ready for publication. It was at this point that Michael Palin came to its rescue, generously providing the project with funding that enabled it to employ Ramesh Dhungel for a further year.  As this additional year drew to a close, the Friends of the British Library stepped in to extend it for six more months, by which time there was a complete first draft of the catalogue.  The work of editing this and preparing it for online publication was completed by John Whelpton, an independent scholar based in Hong Kong, Mark Turin, a researcher based at the University of Cambridge, and Burkhard Quessel, the Curator of Tibetan Collections at the British Library.  Michael Hutt expressed his and David Gellner’s thanks to the Leverhulme Trust, Michael Palin, and the Friends of the British Library, and to all whose work had contributed to the completion of this enormous task.

Finally, Michael Palin explained that he had agreed to provide the project with financial help because he felt that such scholarship was rare in the present day and deserved to be widely disseminated.  He then formally launched the catalogue website with the click of a mouse.