Separated from my family for almost two years since the outbreak of COVID-19, I embarked on the expedition from the UK to China right before the university closed for the holidays in December 2021. Although I familiarized myself with the elaborate procedures needed to be followed throughout the whole journey – such as taking 7 different COVID tests, writing “declaration forms” about COVID infection and vaccination histories, and uploading a series of documents on WeChat to obtain a “green QR code” – the traveling still felt tumultuous. 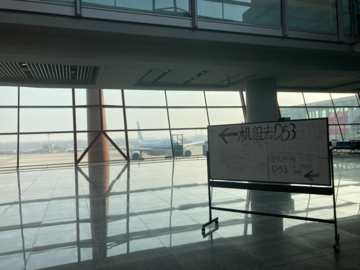 The entire building of Terminal 3-D of the Beijing Capital International Airport is used for channelling returnees from overseas destinations. The white board writes: AirChina staff please go to D53. (Photo by author.)

“This is even more stressful than gaokao [Chinese national college entrance exam],” a girl sitting next to me during our layover in Stockholm (China had banned direct flights from the UK) grumbled while waiting for her COVID test results and uploading her documents on WeChat. If returning to China during COVID was an exam, delivering the correct answers, unlike goakao, was not just a matter of the examinee’s own knowledge and capability. Instead, it involved a complex and hidden network of human bureaucracies as well as non-human agents packed in a “black box[1]” invisible and out of reach for the examinee. The contents of our bodily fluids and the officers authorizing the ever-changing policies played roles as crucial as ourselves in obtaining the desirable test results and the green QR code. Having no absolute agency and control over such process was a nerve-racking one, not least because one would be rejected from boarding the flight without the green code. The mysterious black box worked its magic, and I boarded on my last flight.

Slumping into the couch of my quarantine hotel in Beijing after more than 30 hours of travelling, I picked up one of the leaflets the staff handed to me upon check-in. “Some of the limitations we impose might seem to offend your legal rights,” it writes, “but they are in fact protecting the rights of the masses (dazhong).”

As the virus’ aggressive mutations became the basis for countries like Australia and New Zealand to end their “zero-COVID” approach, they are yet the exact reason for China to keep such an approach. While various comments and interpretations have been made about China’s COVID strategies, here I would like to make a couple of brief observations about the rhetoric applied by the party-state when trying to govern its subjects under the zero-COVID approaches.

Discourse of collectivity, like the one I quoted in the opening paragraph, is usually deployed in maintaining public order for a country that still claims socialism as its main political ideology. In orchestrating the returning of overseas Chinese, the state’s narrative makes the social body of each returnee a meaningful position embedded in the bigger narrative of the country’s battle with COVID-19 [2]. “The united effort of all is strength; you play a part in combating the pandemic [zhongzhi chengcheng; kangyi youni]” is a phrase/slogan usually seen on banners in public space or printed notices. What’s emphasized in such narrative are both the orderly public, and the individual returnee, the “you,” whose behaviors are politicized within such order. 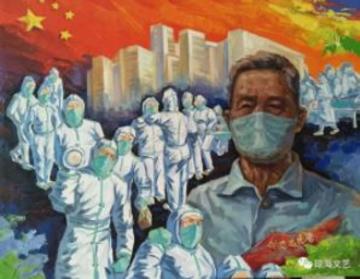 A manifestation of the “unified effort of all” is perhaps the staff dressed in hazmat suits surrounding me from the moment I boarded on the AirChina flight all the way to my quarantine hotel – restrained in the apparently uncomfortable suit and individually unrecognizable, the staff becomes both the operative and the representational force in the collective and national project to combat COVID (see image 2 and 3). In a way, the pandemic is rendered as a historical drama, through which subjects are signifiers whose actions – such as performing hygiene routines, reporting body temperatures twice a day, and most importantly staying in the hotel room for 21 days – become meaningful.

Simultaneously existing with the portrayal of the pandemic as a shared struggle is also the targeting of individuals as subjects responsible for their own physical as well as psychological well-being. Upon starting the quarantine, each person was handed a stack of materials related to the “self-management” of mental health issues printed by the local department of mental health. In one leaflet, a form is given for self-evaluating one’s “mental stress levels,” followed by a several of techniques about “how to ease the mental stress.” Other than deep breathing, working out, doing yoga, and talking with friends, a technique suggests the importance of “the practice of positive self-talking,” such as “I can keep a good routine in my life. There’s always a solution to any problem.” Or “This is a rare opportunity. I believe there will be rainbows after the rain.” When psychologizing problems the individual might face during the quarantine, and offering possible solutions, the state also practices a kind of therapeutic governance through rhetoric that are seemingly depoliticized [3]. 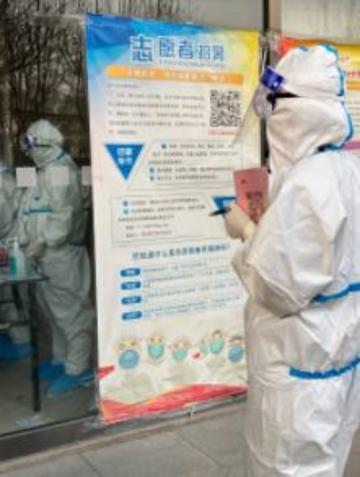 A staff member dressed in hazmat suit, standing in front of a poster with an illustration of people dressed similarly. (Photo by author.)

The co-existence of the discourse of “people as one” and the self-responsible individual is perhaps itself symptomatic of late-socialist neoliberal China. In Beijing, I could hear both approval and condemnation of the state’s approaches to control the pandemic, while most wonder when this will come to an end. Yet, if the state is established as the powerful, but also caring agent directing the orderly public and protecting the individual, ditching the zero-COVID strategy might as well mean disqualifying the narrative of COVID as a national battle, and therefore disassembling the infrastructures of a “unified semiotic regime[4]” through which the righteousness of a system could be claimed.

3. Li Zhang (2020) offers an insightful analysis on the complexity of “therapeutic governing” in post-reform China.