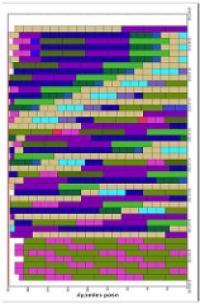 'Stochasticity in cultural evolution: a revolution yet to happen' by Alexandra Alvergne
History and Philosophy of the Life Sciences, published online 27 November 2017

Over the last 40 years or so, there has been an explosion of cultural evolution research in anthropology and archaeology. In each discipline, cultural evolutionists investigate how interactions between individuals translate into group level patterns, with the aim of explaining the diachronic dynamics and diversity of cultural traits. However, while much attention has been given to deterministic processes (e.g. cultural transmission biases), we contend that current evolutionary accounts of cultural change are limited because they do not adopt a systematic stochastic approach (i.e. accounting for the role of chance). First, we show that, in contrast with the intense debates in ecology and population genetics, the importance of stochasticity in evolutionary processes has generated little discussion in the sciences of cultural evolution to date. Second, we speculate on the reasons, both ideological and methodological, why that should be so. Third, we highlight the inadequacy of genetically-inspired stochastic models in the context of cultural evolution modelling, and ask which fundamental stochastic processes might be more relevant to take up. We conclude that the field of cultural evolution would benefit from a stochastic revolution. For that to occur, stochastic models ought to be developed specifically for cultural data and not through a copy-pasting of neutral models from population genetics or ecology.