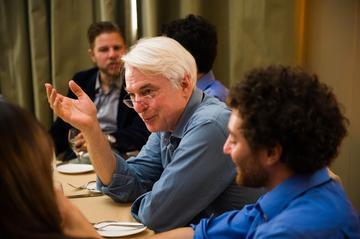 Steve Rayner (1953-2020), the founder of the Institute for Science, Innovation and Society, enjoyed an international reputation as an influential policy scholar.  His favourite professional affiliation outside Oxford was with a distinguished American think-tank, the Breakthrough Institute.  There he found kindred spirits for his own style of ‘undisciplined social science’, bringing fresh and independent perspectives to major policy issues.  He was gratified, in his last year, to be the winner of the Breakthrough Institute’s Paradigm Award for 2020.  The citation tells much about Steve: “It has long been a rule of thumb at the Breakthrough Institute that if something is worth saying about climate change, Steve Rayner said it 25 years ago”.  Those who worked with Steve in any of his varied fields of interest would find the same.  And a re-reading of his papers after the passage of time will confirm the judgement; they are still illuminating and gently provocative.

Steve’s last paper was drafted in collaboration with Daniel Sarewitz, a close friend and associate of Steve’s for many years.  It was published in the Breakthrough Journal, with an appreciation by the editors.  Their title for the issue is ‘Uncomfortable Knowledge’, which itself is one of Steve’s most fertile ideas.  The title of the essay confronts one of the most challenging themes of our time, the ‘post-truth’ world.  There it is argued that the problem is not so much in malevolent attacks on the truths discovered and presented by Science, as in the failure of the expert class to “attend to the panoply of public values that are unavoidably implicated in the construction of policy-relevant science”.  The argument is presented with Steve’s (and Dan’s) customary wit and wisdom, starting with a surprising example of expertise: Mark Twain’s riverboat pilot on the Mississippi (Steve was himself a keen narrow boat pilot).

A link to the paper in the Breakthrough Journal is available here.  It is hoped that Steve’s friends will have a digital symposium some time soon, not so much a memorial as a refreshment and an opportunity to continue our engagement with his work and ideas.