Steve Rayner, James Martin Professor of Science and Civilisation and founding director of the Institute for Science, Innovation and Society (InSIS), has passed away 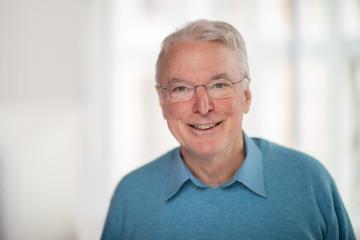 Our dear colleague and friend, Steve Rayner, James Martin Professor of Science and Civilisation and founding director of the Institute for Science, Innovation and Society (InSIS), passed away last Friday, 17 January, after a courageous battle with cancer.

A proudly “undisciplined” scholar and thinker, Steve’s intellectual contributions range widely across academic fields and global challenges, but are perhaps best known in relation to climate change, and his advocacy of decentralised approaches to some of the world’s most intractable problems.

Steve completed his DPhil in Political Anthropology from University College London in 1980, with a thesis on the cosmologies of far-left organisations. At UCL he worked under the supervision of Mary Douglas, and carried her legacy of research into the cultural basis of risk perception far and wide.

Steve began his career as an anthropologist in U.S. government and policy institutions, first at Oak Ridge National Laboratory, where he was Deputy Director of the Center for Global Environmental Studies, and later at the Pacific Northwest National Laboratory, where he was Chief Scientist. His collaboration with Elizabeth Malone resulted in the publication of the four-volume series Human Choice and Climate Change (1997), a groundbreaking examination of the social, political and institutional dimensions of climate change. Steve was one of the first social scientists to tackle climate change head on, and to characterize the challenge it posed for dominant models of international governance. He anticipated that more climate science would by itself fail to reduce uncertainty or mitigate political conflict over the proper course of action, and warned against legally binding international agreements that give the illusion of action but deliver very little change on the ground.

After a stint as Professor of Environment and Public Affairs in the School of International and Public Affairs at Columbia University, Steve moved back to the United Kingdom to direct the Science in Society programme of the Economic and Social Research Council, an initiative that was instrumental in expanding the range of Science and Technology Studies scholarship in the UK. His close friendship with James and Lillian Martin culminated in the creation of the James Martin Institute (now InSIS), the precursor of the Oxford Martin School, and in the establishment at Oxford of a flourishing community of scholars dedicated to the study of science in society.

Steve’s ideas never sat comfortably with all-encompassing orthodoxies or discipline-oriented reasoning. In fact, he turned the category of “uncomfortable knowledge” into a powerful heuristic to understand the institutional basis of knowledge and ignorance – as well as a good test for the sharpness and relevance of his own thinking. His deep appreciation for “clumsy” but pragmatic solutions set him apart as an early advocate of polycentric, bottom-up approaches to climate change. In a set of influential articles he warned against universally inclusive, target-oriented climate policy in favor of approaches that built upon the heterogeneity of motivations, capabilities and cultural imaginaries that actors bring to bear on the problem. In recognition of his prescient work on climate policy Steve was recently awarded the 2020 Paradigm Award by the Breakthrough Institute.

Steve’s personal courage and intellectual generosity have left a profound mark on those of us who have been fortunate to work closely with him. He will be sorely missed by his colleagues at Oxford, and by many others around the world who have drawn inspiration from his scholarship and personal example.

We are planning a commemoration of Steve’s life and work later this year. If you want to be informed, please let us know at enquiries@insis.ox.ac.uk