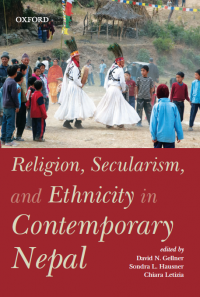 Nepal has passed through dramatic changes in the last thirty years, including a Maoist revolution, the transition from monarchy to republic, three new constitutions, the declaration of secularism, and intense globalization. What happens to religion under conditions of rapid social and political change? Is religion still a valid means of coping with the world? How do citizens of the former Hindu kingdom understand secularism? How do changing public festivals reflect and/or create new group identities? Is religion becoming more privatized? Is the link to healing practices transforming or not, and if so, how? Is the gap narrowing between the cultural worlds of town and country?

In an attempt to answer these questions, twelve anthropologists and ethno-Indologists of Nepal provide case studies focused on secularism, secularization, individualism, spirit possession, animal sacrifice, the role of state functionaries in festivals, the creation of new ethnic festivals, clashes and synergies between Maoism and Buddhism, and conversion to Christianity. In his Afterword Rajeev Bhargava analyses the experience of Nepal in comparative perspective and asks whether Nepal is finding its own solution to the conundrum of secularism..

Professor of Anthropology of Religion