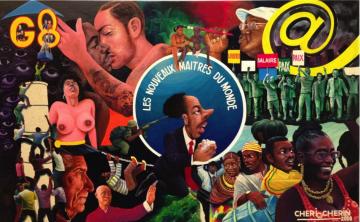 Contemporary African societies are regularly depicted as inherently homophobic cultural spaces by Western media. Drawing on ethnographic fieldwork among self-consciously effeminate fioto men and their so-called ‘normal’ boyfriends in Kinshasa (DRC), this article troubles such monolithic images of ‘African homophobia’. My interlocutors’ deliberately provocative readings of music, video clips, urban painting and street performances bring to the fore surprisingly queer complicities within popular culture. Rather than dis-covering a ‘gay’ subculture hiding in the shadows of the city, this article reveals the possibilities for sexual eccentricity at the surface of urban life and demonstrates how, despite its often moralistic and sometimes violent messages, popular culture is itself always already queer. Moreover, pointing at the usually overlooked homoerotic affordances of urban ambiance as a social field for the accumulation of ‘transgressive capital’, my fioto interlocutors celebrate the proliferation of queer desires in spite of – and, perhaps, because of – everyday performances of homophobia.