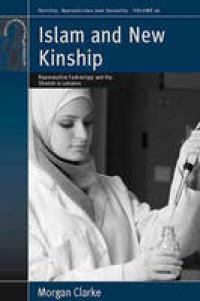 Islam and Kinship by Morgan Clarke

Assisted reproductive technologies such as in vitro fertilization have provoked global controversy and ethical debate. This book provides a groundbreaking investigation into those debates in the Islamic Middle East, simultaneously documenting changing ideas of kinship and the evolving role of religious authority in the region through a combination of in-depth field research in Lebanon and an exhaustive survey of the Islamic legal literature. Lebanon, home to both Sunni and Shiite Muslim communities, provides a valuable site through which to explore the overall dynamism and diversity of global Islamic debate. As this book shows, Muslim perspectives focus on the moral propriety of such controversial procedures as the use of donor sperm and eggs as well as surrogacy arrangements, which are allowed by some authorities using surprising and innovative legal arguments. These arguments challenge common stereotypes of the rigidity and conservatism of Islamic law and compel us to question conventional contrasts between ‘liberal’ and Islamic notions of moral freedom, as well as the epistemological assumptions of anthropology’s own ‘new kinship studies’. This book will be essential reading for anyone interested in contemporary Islam and the impact of reproductive technology on the global social imaginary.