Approaches to Misfortune in Nepal

Approaches to Misfortune in the Kathmandu Valley, Nepal

The Kathmandu Valley is home to an old high culture, both Hindu and Buddhist and based on Tantric scriptures, which gives a prominent place to healing practices. At the same time, it has always been a trading and pilgrimage outpost for Tibetan Buddhists and Indian Hindus. Today, as the capital of a rapidly developing and politically tortured country, it is home to religious and healing movements from all over the world, including Japanese Seimeikyo and Tenrikyo, Rajneesh, Christian missionaries, Buddhist vipassana meditation, naturopathy, and many more. At the same time, many shamans have migrated from the hills and freelance mediums of various sorts are found in most localities. Ayurvedic practitioners are also common and there is an Ayurvedic hospital supported by the government, in addition to many Ayurvedic clinics.

There is a very specific relation to gender in this context, in that possessed mediums are predominantly female, regardless of whether they are Buddhist or Hindu, whereas healers, whose practice depends on the mastery of acquired techniques and some relationship to oral or written texts, are nearly always male. Professor David Gellner has a longterm interest in mapping the overall field in which these movements exist, in Ayurveda and its context, and in tracing patients' or clients' strategies of resort. Publications: articles 1993 (Tantric Healer), 1994 (Priests, Healers). He also has an interest in similar phenomena in Japan, 1996 (Temples for life). 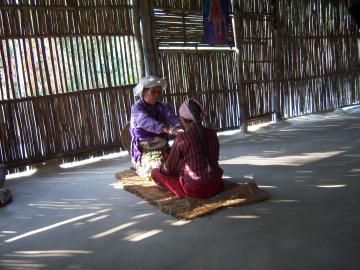 A healing session in a syncretic temple inside a Bhutanese refugee camp, south east Nepal (photography by David Gellner, 2009)