My research in Myanmar (Burma) looks at women’s participation in an organisation called ‘a-Myo Batha Thathana saun shauk ye a-hpwe’ – Ma Ba Tha, for short. Since its formation, this collection of Buddhist monks, nuns, lay men and women, has been variously labelled ‘hardline’, ‘radical’, and ‘violent’. Given its size and geographical diversity, it’s hard to define exactly where they belong on the religious ‘extremism’ spectrum. Those of us working in Myanmar do, however, generally agree that Ma Ba Tha has something to do with ‘Buddhism’ and something else to do with ‘Nationalism’ – but that’s where the consensus ends.

As an anthropologist I find that these vague categories are themselves problematic. As such, my research focuses less on the gendered experience of women in the Ma Ba Tha movement – though this certainly features prominently - and more on the ways in which women’s perspectives help us to understand what it is that Ma Ba Tha represents to its members and supporters. Is participation in Ma Ba Tha activities a means through which women become certain kinds of people, or is membership a vehicle for fulfilling ethical obligations to race, religion, and community? Is there truth in women’s assertions that Ma Ba Tha is really about Buddhist missionary and charity work, and not - as others have suggested - about religious bigotry, misogyny, or party politics?

When I arrived in Mandalay, Myanmar in October 2016, I set out enthusiastically to find my research participants. Like many of my disciplinary forbears, I was terrified these people I’d been talking about for years might not actually exist – or at least, not exist in the way I imagined them. I spoke to journalists, academics, and activists, but no one had any way of identifying - let along contacting - the women I was looking to speak with. Finally, a young monk offered to take me to New Masoyein, the monastic headquarters of Ma Ba Tha in Mandalay, to have a look around. At the very least, I thought I might meet a few women working in the monastery’s administration office, and that would be as good a start as any. 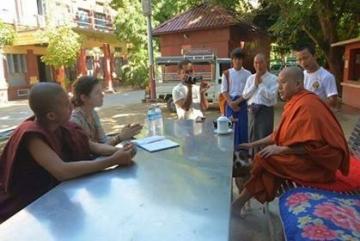 Interviewing U Wirathu at the new Masoyein Monastery

You might recognize the man sitting across from me from his Time Magazine cover. A stolid portrait of this middle-aged monk, U Wirathu, ran with the rather ignomious title, ‘The Face of Buddhist Terror’, back in 2013.

When I learned that I’d been granted a one-on-one interview with U Wirathu, I was more anxious than excited. Interviews with the notorious monk have become an absurd rite de passage for time-poor journalists looking to make a name for themselves, and I wasn’t interested in replicating this behaviour. In the end, however social protocol won out; turning down an opportunity to interview U Wirathu was far more likely to create problems than solve them.

Luckily, the gambit paid off. At the end of our interview, U Wirathu produced a mobile phone from his draped robes and began reading off names and phone numbers. A few of the women he called directly, instructing them to make themselves available to meet me.

Just like that, I was in. But being ‘in’ came with its own challenges. In addition to an immediate - and rather unsettling - visit from Special Branch, the shadowy government agency known for stalking activists and arresting journalists, a few weeks after the interview I received a text that made my heart race: ‘Wirathu made you totally famous’.

I clicked the accompanying hyperlink, and picked at my cuticles anxiously as the page slowly loaded. It was a Facebook photo, and I was in it. 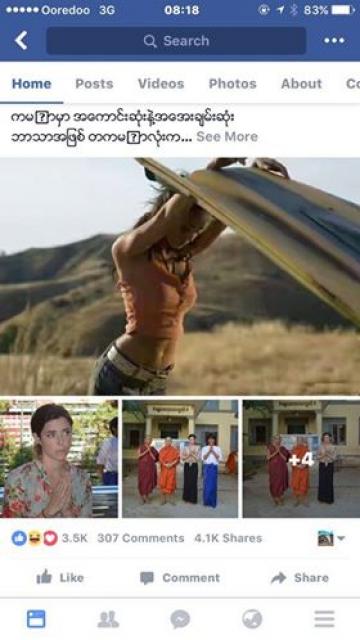 When I’d interviewed U Wirathu, I knew it was likely his public relations team would post my picture to his popular Facebook page. What I did not anticipate was that one of Wirathu’s tech savvy critics would repurpose the photos of our interview and pair them, on an anti-Wirathu FB page, with stills of Megan Fox from the film Transformers.

Indeed, a few weeks after my meeting with the controversial monk, a post featuring my face, an overheating engine, and Megan Fox’s exposed midriff had been ‘liked’ by nearly 3,000 people and shared more than 4,000 times.

Luckily, by the time my photo went viral I had already strapped my bag to the back of my motorcycle and moved into a nunnery in rural Sagaing. The Abbess was personally recommended by U Wirathu for her strength in the Ma Ba Tha movement – a fact she took great pride in.

My research is still fresh and I’m busy sorting through both its theoretical implications and emotional impact. I had been living and working with the women of Ma Ba Tha for nearly a year when the violence in northern Rakhine escalated, sending Muslim refugees streaming across the border into Bangladesh. A viral post in which my photo appears alongside Megan Fox in a crop top is somehow easier to write about, regardless of how frightening it was at the time, because it’s flippant and funny and – critically – because it is about me. I know how to represent myself. But how do you represent women with whom you have shared many meals, laughs, and long embraces, when those women are now seen by many of your academic and professional peers as complicit in a moment of horrific human tragedy? How do you write in the joy and the genuine connection?

I am grateful to be writing this dissertation with the support of my supervisor and peers, the many ‘significant others’ who can help me to strike the right balance in my portrayal of a deeply sensitive subject. I also find myself paging through well-worn copies of my favourite ethnographic tomes in search of direction. I keep coming back to the introduction of Writing Culture in which Clifford writes:

“Ethnographic truths are thus inherently partial—committed and incomplete… once accepted and built into ethnographic art, a rigorous sense of partiality can be a source of representational tact.”

As I begin the writing up process, ‘partial truths’ occupy my thoughts. Not the fear and perhaps failing of them, rather the creative and constructive potential too.