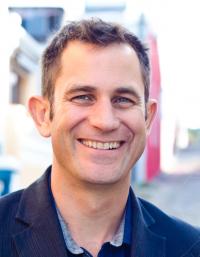 In October 2017, Thomas Cousins joined the School as the first Clarendon-Lienhardt Associate Professor in the Social Anthropology of Africa. He is also a Tutorial Fellow in Human Sciences at St Hugh's College. Thomas kindly agreed to answer some questions about his new post, his South African background, and the differences he's noticed as he settles into academic life in the UK.

Please can you tell us a little about your new role here at SAME?

I am fortunate to be appointed the first Clarendon-Lienhardt Associate Professor in the Social Anthropology of Africa, which means that I contribute to research and teaching in the Institute of Social and Cultural Anthropology both generally and with a focus on Africa. I’m also a tutorial fellow in Human Sciences at St Hugh’s College.

Where did you come from?

I am from southern Africa, having been born in Swaziland, and grown up in Zimbabwe and South Africa. My undergraduate training was at the University of Cape Town and I completed a doctorate at Johns Hopkins University in 2012. I then returned to Cape Town and taught social anthropology at Stellenbosch University for five years.

What are your main research interests?

My main interests lie in health, sexuality, kinship, labour and environment, but those are rather broad terms. More specifically, I have focused on nutrition, HIV and a critique of “the gut”; I have an abiding interest in ordinary language philosophy and its reception in anthropology, particularly with regard to new ways of thinking the political, ethics, and settler colonialism together. I have new research interests in mining and environmental change in South Africa, on the one hand, and urban animals and health on the other. One thread that links these concerns is what one might ‘life’s relations’: i.e. forms of life and modes of obligation, threading between critical engagements with the life sciences and reconsiderations of relatedness and locality.

Was there anything that surprised you during your move to Oxford and the UK?

Apart from the shock of the weather (both the cold in winter and the surprising heat in summer!), I was struck by the uncanny feeling of being an English-speaking South African and finding the UK both utterly alien and strangely familiar. Also, the Brexit saga continues to surprise and disappoint. On the other hand, I have been pleasantly surprised by how warm and welcoming everyone at Oxford has been.

How does the academic life in Oxford compare to your previous role in South Africa?

This is tricky one: on the one hand, the resources and teaching conditions at Oxford are unparalleled, and I’m extremely grateful and excited about this. On the other hand, South African universities have a much stronger engagement with issues of access and what we call ‘transformation’, which includes access for students historically disadvantaged by apartheid, but also a range of issues to do with training new academics, pedagogy, curriculum, and institutional structure. From what I can see, we are just beginning this debate at Oxford and will have a lot to learn from countries around the world.

What is your main goal for your time in Oxford?

I have three ambitions: first, to realise my research plans; second, to contribute to teaching in the Human Sciences, Msc in social anthropology and the anthropology of Africa; and third, to participate in efforts to put Oxford into closer conversation with institutions in southern Africa, to the benefit of students and colleagues there and at Oxford. I’m hugely encouraged by the conversations I’ve had so far with colleagues and students in SAME, around Oxford and in southern Africa, and excited to see what we can do together.