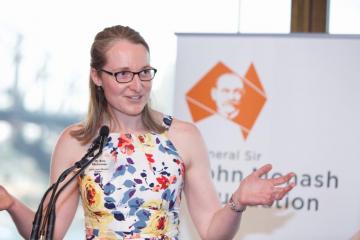 I grew up on a small farm in South Australia, spent a year at high school in France, and recall once asking a highschool careers counsellor which form to complete if what I was going to do later in life did not yet exist. That was in the late-1990s, before the medical anthropology program in Oxford had commenced.

My family instilled in me things that remain my core values: integrity, collaboration, hard work, and having fun. These, along with a deep commitment to human wellbeing, are infused throughout all of my work.

I studied medical sciences, majoring in nutrition, neuroscience, anatomy, and physiology. I taught nurses and worked in a chemistry R&D lab. I completed my Honours research in functional anatomy and I thought more study wasn’t for me, so I looked for a job.

I worked in the SA Department of Health and in international development consulting. I managed projects including a scoping mission on human rights in Iraq, a working visit on fiscal reform in China, and was on the program design team for Australia’s assistance to Nauru. I learned that science by itself often fails communities. A mentor and former supervisor, Professor Maciej Henneberg, encouraged me to consider anthropology and put me in touch with his friend, Stanley Ulijaszek.

After several years of patiently and collaboratively refining applications, I was floored to receive a Clarendon Award to participate in the MPhil program in medical anthropology at SAME. I was almost prepared for the amount of hard work the degree contained, but I was totally unprepared for just how much it would unravel everything I ever thought I knew about the world. It dismantled my entire world view, and anthropology often still does for me. I’ve been exploring incredible new horizons ever since.

I was privileged to be able to stay on in Oxford for my DPhil, thanks to the support of my supervisor, Stanley Ulijaszek, and the General Sir John Monash Foundation in Australia. I studied and taught medical anthropology, the human sciences, and rowing in Oxford – I developed a passion for all three. I also did some consulting and facilitation work with companies in the UK and France: I designed and delivered programs for young offenders and young achievers, I represented Australia in developing the youth response to the draft SDGs, I planned and managed a lot of academic conferences, and facilitated a thinktank to design a new EU-Pacific research framework on NCDs. Through all this I learned something: anthropology has the potential to change lives for the better, but could do much more to have tangible influence.

I would be lying to say that the period of post-thesis consolidation was easy. I’ve never had my hopes up for so many exciting opportunities, or experienced so many rejections. I’ve also never experienced such strong support from a few important friends and mentors – and I remain very grateful for this. A short internship opportunity arose at the Australian Government Department of the Prime Minister and Cabinet, and this turned into over two years of service in team that delivered advice on some of the nation’s most complex policy challenges. I worked for the Project Office, on projects including gender violence, innovation, cyber security, health, cities and migration. I was surprised how consistently ‘culture’ came up as a ‘problem’ in all of these, and how inadequately it was addressed or considered.

During my time at PM&C I also met some people who were making great headway in thinking about culture and society in policy design. In 2017, I moved to work with ThinkPlace Global to learn more about their award-winning approaches to complex system design. I developed new facilitation methods and approaches alongside a diverse, driven team. Design is action-oriented, and I learned some great new ways to accelerate social research into ground-breaking action.

In late 2017, a friend introduced me to Genevieve Bell, an anthropologist who had just returned to Australia to build a new applied science to manage digital technology, artificial intelligence, and cyber-physical systems, and their impact on humanity. If we are to build a world that promotes human wellbeing in all its forms, this matters: the future is already being built all around us, but very few people are involved in designing and building it.

In April 2018, I became a Research Fellow at the Australian National University’s 3A Institute, where I'm working with a small cross-disciplinary team in the College of Engineering and Computer Sciences. I’m excited by the 3A Institute’s mission to bring in perspectives, experiences, and voices that so far have not been a part of the conversation.

I’m still a Research Associate with the University of Oxford’s School of Anthropology, and I continue to enjoy research collaborations with colleagues in Oxford, Edinburgh, Copenhagen, Yale-NUS (Singapore), and Arizona State Universities. I’m still publishing work from my doctoral studies, in areas including health policy, nutritional anthropology and food in the Pacific. I’m also developing new research, teaching, and collaborations in line with the 3A Institute’s mission – and I hope Oxford will be a part of this!