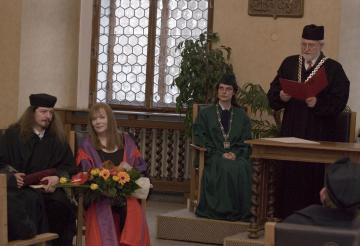 Judith Okely receiving the Seal of the City of Pilsen, Czech Republic, from the mayor (2011).

Professor Judith Okely's research interests include Gypsies/Travellers, continuing from The Traveller-Gypsies 1983. Party to a Marie Curie EU grant, she mentored anthropologists visiting Oxford with research on Roma and contributed to the Roma course at the CEU, Budapest. Other research interests include field methods. Her 2012 Anthropological Practice: fieldwork and the ethnographic method draws on dialogues with 20 anthropologists (of 16 nationalities).Her publications discuss gender, including Simone de Beauvoir: a Re-Reading, 1986, aspects of Auto-Ethnography as in Anthropology and Autobiography, (co ed with H. Callaway) 1992, and Landscapes in rural France (Ethnos 2001).

Judith Okely has held lectureships at Durham then Essex universities. She was elected Professor of Anthropology at Edinburgh then Hull. She was visiting Professor at Bristol and Brunel universities and Paul Lazarsfeld Guest Professor, University of Vienna. She has supervised 25 phds and examined 35.

Since 2008, Professor Okely has lectured in Poland, Finland, Austria, Germany, Greece, Italy, Slovenia and the Czech Republic. Some Conference presentations were in Belfast, Bristol, Norwich, Cambridge, Paris, Ottawa, Stockholm and San Francisco. She has also given Distinguished lectures at the LSE, Helsinki, Vienna, Berlin and Basel.

In 2011, she was awarded a medal by the Faculty of Philosophy, University of West Bohemia, as a ‘World Scholar’ and also received the Seal of the City of Pilsen, the Czech Republic.

2017 ‘Gypsy Intermediaries Guide the Stranger: Bringing Reciprocity, some Misunderstanding, but Protection from Outsiders’ Journal of Gypsy Studies, Vol 1 no 1 pp 65-84.

2017 ‘Anthropologists Writing down and Writing up: through Fieldwork to Publication’, JJ Bachofen Lecture no 3, Institute of Anthropology, Basel University.

2013 FOREWORD to: Gypsies and Travellers in Housing: The decline of Nomadism by D.M. Smith and M. Greenfields, Policy Press.

2012 ‘The Isle of Wight as site for English/British Identity’, in  Islands and Britishness Eds J. Matthews and D. Travers, Cambridge Scholars

2009. 'Written Out and Written In: Inishkillane Remembered' in Irish Journal of Anthropology Vol 12 (2).