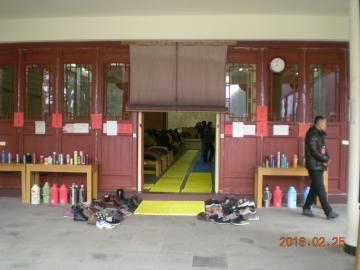 Ngar-sze Lau completed her MPhil thesis on the emergence of Theravāda meditation and mindfulness practices in Hong Kong at SAME in 2014. As a PhD candidate at Lancaster University, she has started an ethnographic study on transnational meditation communities in mainland China since 2014. The fieldwork has been challenging and adventurous, yet undoubtedly rewarding. In her thesis, she tries to argue that the rise of transnational meditation is an active response to Buddhist modernization in the Chinese social context.

After presenting her work at UBC in August 2016, she plans to give papers in 2017 at CUHK in Hong Kong and at the IABS in Toronto. She will receive Sheng Yen Education Foundation Grants for a three-month visiting studentship at the Graduate Institute of Religious Studies, National Chengchi University in Taiwan in 2017.

The fieldwork photo: From the entrance of a 'meditation hall' located at a multi-functional venue of a Chan monastery, it shows a mixed culture of traditional Chan mediation and Theravada meditation.