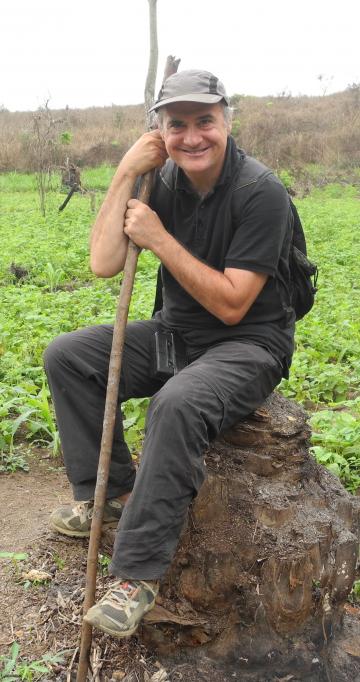 Associate Professor in the Social Anthropology of Africa

Prior to joining ISCA in October 2012, Ramon Sarró had been a Senior Researcher at the Institute of Social Sciences of the University of Lisbon since 2002, as well as a Fellow at the Program for Agrarian Studies, Yale (2010-11). He has been a member of the French network REASOPO (Réseau européen d'analyse des sociétés politiques) since 2009. He has conducted research in Guinea, Guinea-Bissau, Portugal, Angola and the Democratic Republic of Congo. He is the author of the award-winning The Politics of Religious Change on the Upper Guinea Coast: Iconoclasm Done and Undone (International African Institute 2009) and co-editor, with A. Pedroso de Lima Lima, of Terrenos Metropolitanos: Desafios Metodológicos (ICS 2007), with D. Berliner of Learning Religion: Anthropological Approaches (Berghahn 2007), and with R. Blanes and M. Balkenhol of Atlantic Perspectives: Places, Memories and Heritage (Berghahn 2019). He has directed the EU (NORFACE) programme "Recognizing Christianity: How African Migrants Redefine the European Religious Heritage” (2007-2010), and has been the British PI of the programme “Currents of Faith - Places of Memory”, an EU (HERA) consortium (2013-1016), for which he has conducted 9 months of fieldwork in rural Angola. In 2010, together with Simon Coleman (Toronto), he created the annual review journal Religion and Society: Advances in Research (Berghahn).

Sarró has worked on the religious and political dimensions of social change in Africa and the diaspora, as well as on the manifestations of prophetic imagination and on material culture (including its iconoclastic destruction). A manuscript on the prophetic invention of a Kongo alphabet is currently under preparation. He has been the PI of the international project “Mangroves and Aluminium: Environmental and Socio-Cultual Resilience on the Coast of the Republic of Guinea”, funded by the John Fell Fund large grants award scheme (2018-20), in which teams of researchers from Europe and Guinea (Conakry) have been assessing the impact of aluminium mining upon the mangrove-rice farming communities of the Guinean coast, a region he has been familiar with since 1992.

Since 2013 Sarro has also been very active in the revitalization of the Ethnographic National Museum of Bissau, an institution created in 1987 but that had disappeared during the civil war of 1998-99. Based on old photographs, Sarro and a team of researchers have reconstructed the history of the museum and managed to re-create it in the capital of Guinea-Bissau, a study now featured among the 'impact case studies' produced by researchers of the University of Oxford. A book in Portuguese, funded by the Gulbenkian Foundation, narrates the research and shows the images digitally recuperated (O Museu Nacional Etnográfico da Guiné-Bissau: Imagens para uma História, 2018). In 2020, an exhibition on the Bissau project, entitled ‘Blow-Up in Bissau: Photography and Museum Revival in West Africa’ (co-curated with Ana Temudo) opened at the Pitt Rivers Museum, where it can still be visited. Together with Marina P. Temudo he served as scientific advisor for the film “Chasing Shadows: The Revitalization of a Prophetic Movement in Guinea-Bissau” (Dir. Roger Canals, Oxford and Barcelona, 2019), a documentary that vividly captures the ceremonies and the material works of prophetic imagination among farmers who belong to the prophetic movement called ‘Shadows’. The film has been selected for the Festival of Social Sciences of the ESRC 2019 and for the Film and Media Festival 2020 of the Society of Visual Anthropology of the AAA, among many other documentary festivals.