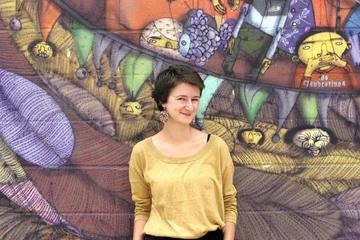 Maria Șalaru’s research is situated at the intersection between anthropology and architecture. At Oxford University, she is the Co-Investigator on the Disobedient Buildings project, led by Dr Inge Daniels and funded by the Arts and Humanities Research Council. At University College London, she lectures in the Department of Anthropology, where she specialises in the anthropology of the built environment.

Particularly interested in the material transformations of ageing buildings, she has conducted ethnographic research inside a block of flats in Northern Romania, studying how inhabitants are involved in the care and refurbishment of their building, when the state has retreated from those responsibilities. She also filmed and directed The Block, an observational documentary about the inhabitants of this building, which was screened at film festivals internationally and received the Best Documentary award in 2016 at Ficarq, the Architecture and Film Festival in Spain.

She has conducted postdoctoral research at Durham University about people-centred approaches to urban infrastructure, in collaboration with Durham County Council. This Erasmus+ project brought together universities and non-academic partners from the sustainable living and energy sector, based in Slovenia, Czech Republic, the UK and the Netherlands. At Durham, she also briefly did research on energy modelling at the National Centre for Energy Systems Integration (CESI).