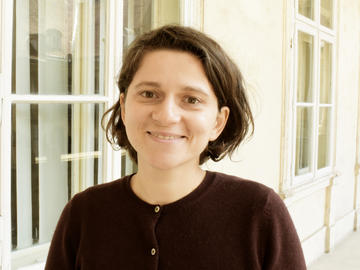 Gabriela Nicolescu is a visual anthropologist and curator with research interests in ageing and care, migration, museum anthropology and exhibition making. She gained her PhD in Visual Anthropology at Goldsmiths, University of London, and then worked on several projects as a curator and postdoctoral researcher at Goldsmiths and University College Cork (Ireland).  She curated exhibitions in Austria, Hong Kong, Hungary, Republic of Moldova, Romania, United Kingdom and the Philippines and published in several journals, including the Journal of Design History, Journal of Material Culture, World Art and Anthropology and Aging.

Gabriela joined the School of Anthropology and Museum Ethnography in February 2020. She currently works on the Disobedient Buildings project, funded by AHRC.

Nicolescu, Gabriela. (2016) ‘Decorativa: the monopoly of visual production in socialist Romania. The centralised organisation of museum displays in the 1960s and 1970s.’ in The Journal of Design History, Special Issue Design Dispersed, (ed) Adam Drazin and Pauline Garvey, pp. 71-84. doi:10.1093/jdh/epv053.

Connections, Objects in Relation and Context, The National Museum of the Romanian Peasant, Bucharest, 26 May - 12 June 2011.

1980s in Bucharest, the every day life of socialism, The Museum of the Romanian Peasant, Bucharest, 2000.