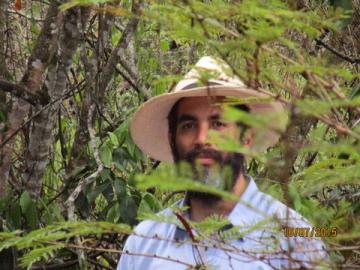 I am a biologist and an anthropologist from the Universidad de los Andes, Colombia. I received my PhD in Social Anthropology from the University of Aberdeen for the dissertation Sweet Dreams Rocking Viking Boats, Biocultural Animic Perspectivism through Nordic Seamanship, developed under the supervision of Tim Ingold. After that I worked as postdoctoral researcher at the University of Iceland in the project Biosocial Relations and Hierarchies, directed by Gisli Palsson. Currently, I am a Victoria Maltby Junior Research Fellow at Somerville College affiliated to the Institute for Science, Innovation and Society, under the tutorship of Javier Lezaun.

I started my undergraduate studies in biology working on the ecophysiology of perception in relation to animal communication and sociality. I was particularly interested in how animals like bats and electrical fish interact with their world, because their perception depends on signal emissions, and it may be available to conspecifics and even to members of other species. However, while developing exploratory fieldwork on the subject through conversations with an Amerindian collaborator, it became evident that this is a generalized feature of perception; all the senses are active and the actions involved in perception are perceivable to other entities in the environment. From this insight my research veered towards biosemiotics and further into a mixture of theoretical biology with philosophy, examining how organisms, cells and other biological systems could be better understood as systems that interpret their environment, both in a hermeneutical and a performative sense.

The insights of this theoretical research drew my interest towards the ethnographic methods of participant observation, which I first explored through a research on the embodied cognition of the skilled practices of seamanship in the Pacific littoral of Colombia. Through this research I observed how the mixed ethnic identities and social dynamics of fisher peoples permeate and are mediated by the abilities required to interact with this highly dynamic environment. Moreover, I revealed how a detailed mimesis of the environment is unknowingly produced, and its seamanship inadvertently interpreted, in syncretic Afro-Amerindian Catholic religious festivals, allowing the community to collectively process embodied information about their surroundings.

For my doctoral research I wanted to contrast Afroamerindian seamanship with a western counterpart. I worked on rope-making, rowing and sailing at the Viking Ship Museum in Roskilde, Denmark, encountering a pragmatic ontology based on the notion of harmony, understood as a joining of beings (artifacts/ bodies/ communities) through their conflicting intentions and memories of interactions with the environment. Further field experience onboard modern fishing vessels off the coast of Shetland allowed me to explore how harmonies were laid with crews, boats, the sea, weather and fish, refracted through many varieties of nausea. Although, I found marked differences in particular in the ways Europeans crystalize skills in crafted artifacts, I also found underlying similarities between the perspectivist ontologies of Amerindian hunter-gatherers, those of European industrialized fisher peoples, and of my own early approaches to biohermeneutics. Rope-making, nausea, fishing and gutting practices in the North European context revealed the role of our microbial inhabitants in interactions with the wider environment, and showed the multiple channels of phenomenological access to microbial worlds with which our sensorium is endowed. With these insights I re-evaluated the medieval perspectivist metaphysics that shaped missionary epistemologies, affecting the subsequent understanding of Amerindian ontologies.

As a postdoctoral researcher in Iceland I explored how innovations in biological knowledge and in biotechnologies are reconfiguring western understandings of nature and society. I worked with biomedical engineers developing prosthetics with artificial intelligence systems that posed fascinating issues about the intentionalities operating in the interactions between amputees, engineers and these technologies. I also followed the work of microbiologists and immunologists as they sought to establish pathways of microbial interactions. Microbes are ‘social’ entities that display mesmerizing complexity in their relations amongst themselves, with our bodies and with the wider environment.

The microbial 'spirits' of traditional systems of health and environmental management

I am currently working on the manuscript for the book Microbes and other spirits: Crossroads of microbiology and Amerindian shamanism, which is based on the last part of my dissertation. The work intertwines biocultural and ethnohistorical approaches, elucidating the parallelisms between the ontological claims of shamans and those of microbiology. It demonstrates how the microbial world is within the reach of human perception and how shamanic practices optimize and articulate these experiences. The work traces early records of Amerindian health and environment management systems, showing their continuing strands of thought and demonstrating how they anticipated and influenced the theory of contagion, the ontological theory of disease, the notion of ecological community and antibiotics. In so doing it clarifies the most baffling aspects of Amerindian ontologies and develops a symbiotic theory of ideas, suggesting that the mind might be more than the activity of the brain. Thus, elaborating critically on ethnographic theory, the book shows how animist/perspectivist ontologies are consistent with microbial ecology.  In this way, the book demonstrates how, at a time when the war on microbes is becoming unsustainable, shamanism affords a refined diplomacy to interact with the highly social microbial worlds in which we are embedded.

My ongoing research challenges and explores the hypotheses postulated on my doctoral dissertation, enquiring further into human capacities of perceptual engagement with the microbial world, interpolating ethnographic and biological approaches while engaging shamans from different ethnicities. This research addresses their perceptual means of access to pathogenic entities and the practices on which they claim to base their knowledge, assessing its potential biological substantiation and its implications for microbial ecology. Grounding the epistemologies of shamans should strengthen their position in relation to biomedicine, as well as that of their communities in relation to other environmental stakeholders. The practices of shamans may offer deeply needed alternative approaches to microbial life, regarding both the body and the environment. Understanding shamanic comprehension of the ecology of pathogens may enrich and reinvigorate ethnopharmacological research, smoothening the transfer of knowledge under more balanced schemes.