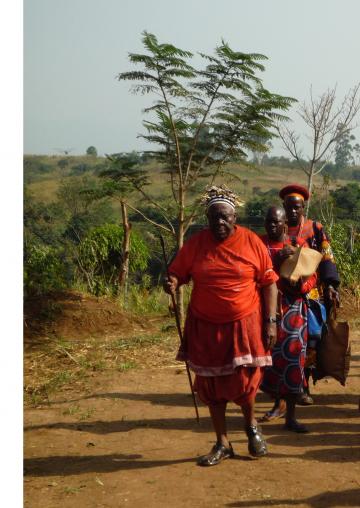 (‘The Fon of Mankon, Cameroon’, copyright Manuela Zips-Mairitsch, with thanks to Jean-Pierre Warnier)

The Marett Memorial Lecture of 2019

How the methods of ethnography, comparison and history might collaborate was a concern to R.R. Marett. As the title of a late collection of his essays suggests, he sought a comprehensive solution that encompassed matters of ‘head, hand and heart’. I shall follow him in these focuses but not in his evolutionary resolution of them. Earlier interest colour phenomena  predominantly concerned itself with two contrary arguments about language: one sought to demonstrate a universal sequencing of basic colour terms, the other to expose the grounds of their incommensurability. Doing so, both drew upon ethnography comparatively, and effectively eschewed history; and both privileged language over practice and desire (to pick up ‘head, hand and heart’).

My comparative interest is in the reciprocal and changing interaction between the colour capacities of subjects, and the colour properties of their object worlds. I treat the two as engaged in mutually purposive and historically reformative relations. My overall thesis is pursued with reference to two colour categories in Africa south of the Sahara: redness, the ur-hue, supplementing darkness and lightness (or black and white) in the most parsimonious schemes of categorization; and blueness, a category provoked by such human practices as trade in  goods and the use of pigments. It is through extraversion that colour interactions moved historically from relative incommensurability towards relative abstraction and comparability. Combining case study with comparison yields an evidence-based, non-evolutionary, conjectural history of this process.