The National Ethnographic Museum of Bissau: Thirty Years of History 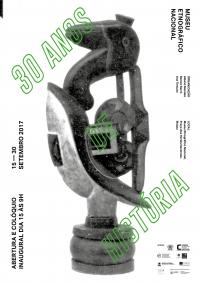 Over the last four years, Albano Mendes, the Director of the National Ethnographic Museum of Guinea Bissau, together with anthropologist Ramon Sarró (SAME) and curator Ana Temudo, have been scanning an old set of nearly 400 contact prints kept in Bissau for 30 years (the negatives and the printed copies being lost forever), which narrate the origins of the Museum in the late 1980s. The Museum, then located in Ajuda, next to the National Archives, suffered irreparable losses during the Civil War of 1998-99 (as, unfortunately, did the archives themselves). It has recently been re-opened in the Praça dos Hérois Nacionais in Bissau. Thanks to the support of several institutions, mostly of the Camões Institute and the Portuguese Embassy in Bissau, in September 2017 the project will exhibit the images the team scanned together with some of the objects the curators of the Museum salvaged from the destruction in 1999. The exhibit will open on 15 September with a roundtable with the main actors in the history of the Museum, and will remain open to the public for 2 weeks. A catalogue including all the images and explanatory texts will be published later, with support from the Gulbenkian Foundation.