Second year of the Oxford-Museu Exchange 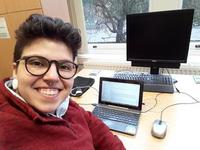 Almost two years have passed since a massive fire engulfed the Palácio de São Cristóvão, in Rio de Janeiro/Brazil, that used to host the premises of the oldest Brazilian scientific institution, Museu Nacional. On that night, 2nd September 2018, while irreplaceable objects burned, Brazil lost an important part of its memory and history. In the weeks that followed, the city of Rio de Janeiro mourned the loss of one of its most cherished museums, a place of science and education that has marvelled generations. Since then, the academic community of the five postgraduate programs working within Museu Nacional has struggled to keep doing research after losing our workplace, while dealing with underfunding and budget cuts that affect all federal higher education. The Postgraduate Program in Social Anthropology (PPGAS/UFRJ) was severely affected, since our library – the largest Anthropology library in Latin America – was completely consumed by the fire. The exchange program that offered a Recognised Student position at the University of Oxford, so a PhD candidate from Museu’s PPGAS could study at the Brazilian Studies Program at the Latin American Centre (LAC) and at the School of Anthropology & Museum of Ethnography (SAME), not only has showed solidarity in the face of such challenges, but also created an opportunity for strengthening ties among researchers of the two institutions.

Since then, the solidarity of our peers and the relentless efforts of our community have been fundamental for trying to rebuild what we lost. The Palácio, now an archaeological site, has been carefully inspected in search of anything that may have survived the fire. Donations and crowdfunding campaigns have been extremely important for working on the recreation of our Anthropology library. As we see those efforts starting to show their results, we can continue doing what we excel on: socially relevant research.

As the second PPGAS’s student to participate in the Oxford/Museu joint exchange program, I have been able to benefit from the University’s libraries, lectures, seminars, study groups, and the academic community both in LAC and SAME while I work on my thesis. My research focuses on “homemade” assisted reproduction techniques in Brazil (especially when used by lesbian couples), the digital networks that allow semen donors and potential mothers to get in touch, and the creative efforts for making family and redefining kinship in a world that is constantly changing, along with new technological possibilities.

The COVID-19 pandemic has also showed that solidarity and collective efforts are more important now than never – and so is scientific research. Joint programs such as this are a key opportunity to participate in the construction of a strong and diverse community of researchers, and I hope I have been able so far to contribute to it by bringing not only theoretical developments from Brazil, but also the inspiration from the creative, collective responses that people I met during my fieldwork elaborate as they create new possibilities of making life happen.

Carolina Maia is a recognised student at the Latin American Centre, University of Oxford, from January 2020 to June 2020. She is co-supervised by Dr Andreza A. de Souza Santos and Associate Professor Elizabeth Ewart. To know more about the collaboration between Oxford and the Museu, please get in touch by email: andreza. desouzasantos@lac.ox.ac.uk