The Paleontology Laboratory was built to provide a suitable workspace to study recent discoveries of mammalian fossils in Gorongosa. The laboratory contains a fossil collection room, a work room for analyzing the fossils, an office, a classroom, and a storage room (for  all collection and survey equipment).

This new facility is a welcome expansion to the Edward O. Wilson Biodiversity Laboratory that was inaugurated in 2014. The Laboratory already supports biodiversity inventories and ecological research. It has a Molecular laboratory and holds zoological and botanical collections of species from the Park. A full-time Masters in Conservation Biology with twelve Mozambican students is also conducted on-site.

The Minister of Land and Environment of Mozambique, after inaugurating the new Paleontology Lab, visited the new facilities and learned about the on-going research

With this new Paleontology Laboratory, it will be possible to display the fossil collection, provide a working space for palaeontology and primatology researchers (including the annual Oxford- Gorongosa Field School) and add another classroom for educational programmes, thereby allowing Master’s program workshops at the same time. 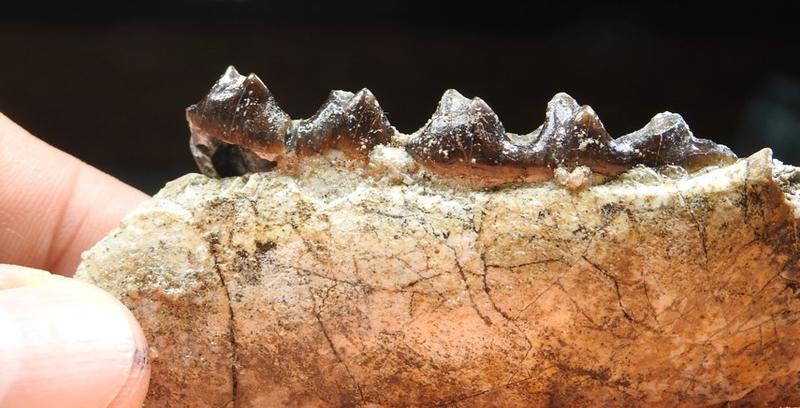 The fossil in the photo is one of several mandibles of giant hyraxes from the Gorongosa fossil sites. We estimate these to be of late Miocene age, about 10 million years old. This is the timeframe of the last common ancestor of the African apes and humans. These are the first fossil mammals discovered in the Mozambique Rift Valley (the nearest fossil mammals in the Rift are in northern Malawi, about 1000 km to the north). Interestingly, we do have two modern-day hyrax species occurring in the Park:

Our most recent fossil inventory includes about 730 fossil specimens, among them:

These fossils fill a major geographic and temporal gap in our knowledge of evolution in Africa. The Paleo-Primate Project is currently creating 3D models of the key Gorongosa fossils so they can be studied by students and colleagues without damage to the precious and unique original fossils. 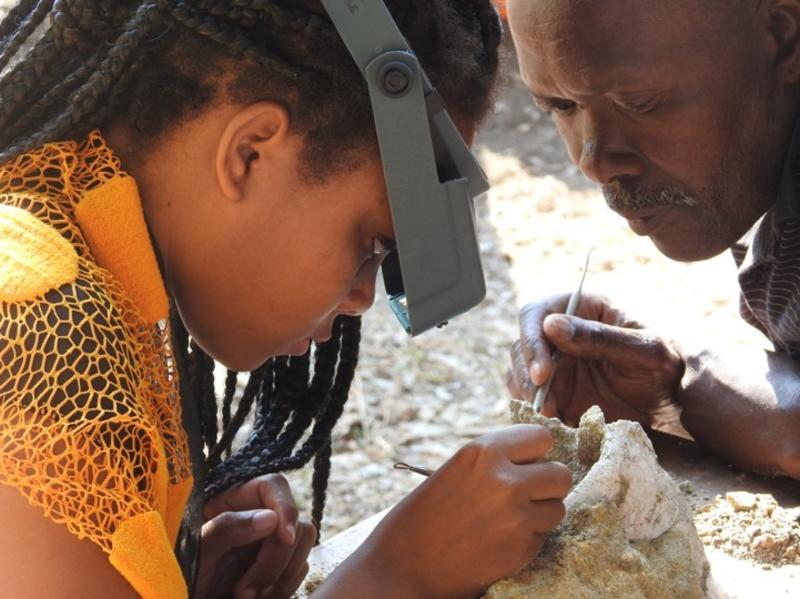 Technician Pepson Makanela from the University of the Witwatersrand in South Africa providing training in fossil preparation in 2019 to Açucena Nhantumbo, a student from University Eduardo Mondlane, Maputo

The Paleo-Primate Project of Gorongosa (PPPG) is led by Dr Susana Carvalho, Associate Professor of Paleoanthropology at Oxford’s School of Anthropology and Museum Ethnography, where she coordinates the Primate Models for Behavioural Evolution Lab at the Institute of Cognitive and Evolutionary Anthropology. The Project is currently training and mentoring several Mozambican students in the area of paleontology: Jacinto Mathe at Master's/PhD level, Amélia Macôa, Clara Mendes, and Açucena Nhantumbo at the undergraduate level (licenciatura, University Eduardo Mondlane). Tongai Castigo (studying paleobotany) has been collaborating closely with the PPPG team, and is now being helped by the team with a paper on fossil plants. Another Mozambican student in the area of primatology is Rassina Farassi, who is completing her Master's.

Watch a reportage about the recent visit to Gorongosa National Park of Mozambique’s Minister of Land and Environment, Ivete Maibaze.

About the Gorongosa Project

Gorongosa National Park (GNP) in Mozambique is perhaps Africa's greatest wildlife restoration story. In 2008, a 20-year Public-Private Partnership was established for the joint management of GNP between the Government of Mozambique and the Carr Foundation (Gorongosa Project), a US nonprofit organization. In 2018, the Government of Mozambique signed an extension of the joint management agreement for another 25 years. By adopting a 21st Century conservation model of balancing the needs of wildlife and people, Gorongosa is protecting and saving this beautiful wilderness, returning it to its rightful place as one of Africa’s greatest national parks.

GNP has been described as one of the most diverse parks on Earth, covering a vast expanse of 400,000 hectares. In recent years, the Gorongosa Project, with the support of Mozambique’s National Administration of Conservation Areas (ANAC), has ensured the protection of a recovering population of lions in this system, successfully reduced key threats, and has been recognized as one of National Geographic's “Last Wild Places” and by TIME Magazine as one of the “World’s Greatest Places - 2019”.