Book launch for Honour and Violence by Nafisa Shah 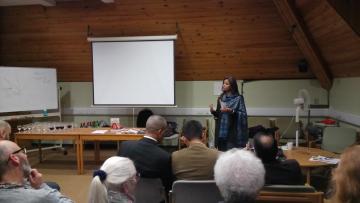 Book launch for Honour and Violence by Nafisa Shah,

On 28 February a book launch took place in the Pauling Centre, the School of Anthropology and Museum Ethnography, for Nafisa Shah's Honour and Violence: Gender, Power and Law in Southern Pakistan, published by Marion Berghahn for Berghahn Books in October 2016.

The book began its life as a DPhil, supervised first by Wendy James and then by Bob Parkin. Its theme: 'The practice of karo kari allows family, especially fathers, brothers and sons, to take the lives of their daughters, sisters and mothers if they are accused of adultery. This volume examines the central position of karo kari in the social, political and juridical structures in Upper Sindh, Pakistan. Drawing connections between local contests over marriage and resources, Nafisa Shah unearths deep historical processes and power relations'.

Nafish Shah is a member of the National Assembly, the Lower House of the Parliament of Pakistan.